After my return from my very relaxing spa vacation in Italy, I jumped right back into the flow of things. Lots of work was scheduled, as I still had some stuff to set up our new place in Luxembourg. There is not too much news I can reveal at this point concerning sponsorships, but soon enough I will fill you in on all the news.

Last week I had some meetings with our tri federation, the Olympic Committee and the Army. Apart from that I attended some
events in Luxembourg so I could share my stories of the past year.

We decided not to take a too long of a break and keep a certain fitness level from early December onwards, as the first race will be in March 2011, where I will fight for the win in Abu Dhabi.  After my second place there this year I a hungry for the big prize END_OF_DOCUMENT_TOKEN_TO_BE_REPLACED

After racing Ironman Hawaii and Ironman Florida within weeks of one another, I decided to treat myself to some real recovery at a spa hotel in Italy.  I basically just laid around for the past week and a half and did nothing at all (outside of eating and getting massages) and it was just great.  I did take a few minutes to record a video-blog for you guys though–hope you enjoy it.

Getting rest while staying busy in Luxembourg It’s about time to post some more details of what happened since Kona. The world has been a bit crazy for me lately but that’s actually a good thing.  Just four days after my race in Hawaii, we left the beautiful island in order to go back home to Luxembourg, but couldn’t find a decent flight and so we got stuck in Phoenix for a bit. A nice spa hotel made our stay pretty enjoyable and we had some time for each other. Once we got back to cold and rainy Luxembourg, we were shocked about the weather. Slowly I started to realize that I have been chasing the sun for quite some time.<!–more–> It felt good to be back home for a short while and as it turned out, we had meetings and appointments nearly every day. Some stuff was actually pretty fun, as you have probably already seen on my posts. Some big changes will be made in our Triathlon federation, as there will be a complete new team in charge starting in December. I just wanted to thank the FLTRI for supporting me on my way. (Well, about this topic there is actually a lot to be said but lets just leave it like that for now. Some come and go, but in this case the problems aren’t actually solved or in other words some of the problem just stay…). As I decided shortly after returning to Luxembourg, I won’t be racing in Clearwater anymore. No real training, but instead some sauna and spa is on the menu since mid of October. The season has been long and I am pretty cooked now- and to be quite honest, since Hawaii, I did three 45 min runs and a 2km swim. That might not be enough to keep my head out of the water or even to finish world champs. As you might know, it feels damn good to have a rest and enjoy life for a bit. Man, I had some good food I was craving at for nearly half a year and believe me, I did some serious wine tasting. It was great to have some fun and no physical stress for a bit. Just a few days ago I read about the new race in Abu Dhabi- and as things look right now I might have to get back training pretty soon again… My 7th place in Hawaii even motivated some Luxembourgish companies to include me in their marketing strategy. So we are crossing our fingers to see what comes out at the end. I will definitely keep you posted on that! Since the 1st of November I am also representing my new club, C.A.E.G in Grevenmacher. It’s a nice club where some of my friends are as well- that’s a good motivation for next year- but it seems like it getting harder each year to top my results… Right now, I am sitting in one of those big birds that fly athletes but also some “normal people” around the globe to attend some more meetings. Next destination Tampa, Florida. I will be watching the race in Clearwater and then enjoy some more days holiday with the family. Is life good or what? Life as a triathlete is not easy, but those few days off give me so much back and that’s exactly what I need right now- big tasks are ahead of me for next year….so I better enjoy the moment.

What a great time! After Prague, I took some fun time off to explore Barcelona-which was awesome, impressive but also a bit stressful like most big cities.

After 6 easy days, I went back to another training camp to do some more necessary work. Location: the hot and dry south of France. The purpose of the camp was to get used to the heat and the sweltering hot conditions. END_OF_DOCUMENT_TOKEN_TO_BE_REPLACED

The latest from Taupo, New Zealand 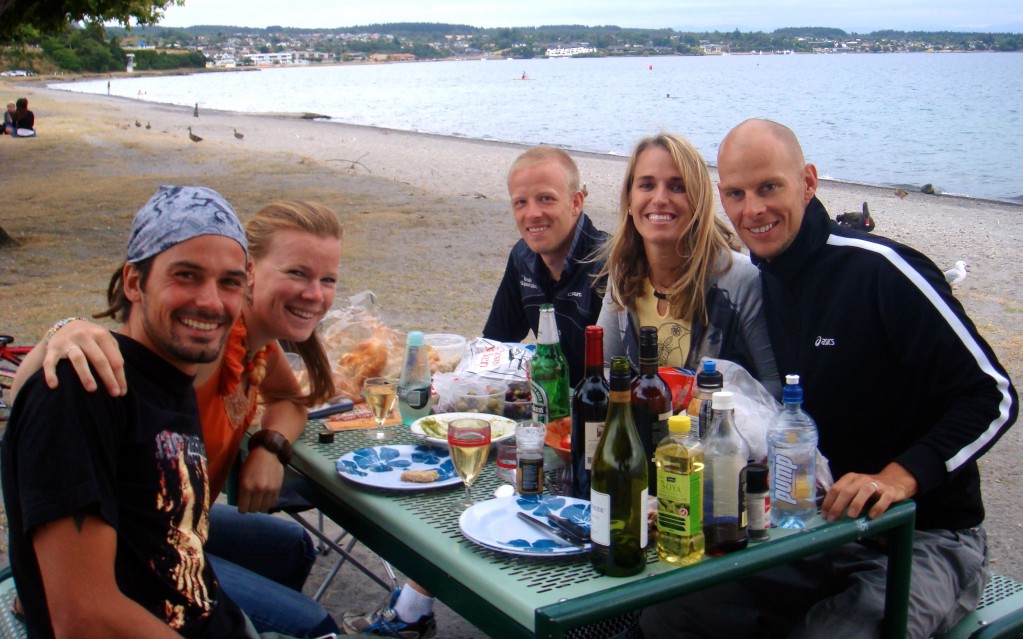 I have tons of news–where should I start? I have been training really well and as it looks, I will get in really good shape for my first race in a few weeks. The race is soon approaching, so right now is the time to put the big volume in.

My little foot injury is getting better each day and I had a few days of running up to an hour, and have had some pain afterwards–-but it has mostly been fine during the sessions. So that could be better–but no need to worry. My swim is awesome and my biking skills seem to get better each day as well so I am very confident at the moment.